Back In The Studio

The Ultimate 3 is back in the studio working on a new single called “I Am.”  The acoustic driven song is a more melodic and rhythmic version of the same track from the “Day In The Sun” album.  Much of The Ultimate 3 music is written and conceived on the acoustic guitar.  Doug (below) and Mike (lead guitars) are big advocates of analog sound and vintage tube-driven gear.  As pictured below, much of their studio time is experimenting with sonic quality and signal flow though outboard gear to capture that distinct “sound.”  The band is planning on releasing a couple of singles to break up the “Day In The Sun” album and their new release. 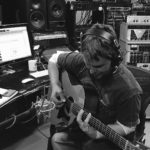 The song “I Am” is a montage of acoustic guitars with a warm, rhythmic groove.  The acoustic overtones and mellow vibe are driven by the 6 string bass play of Mike Steffes.  The sub bass and hard hitting drums drive the track and give it that distinctive U3 sound.

Below is a rough mix of the song which will be updated once mastered.

The Ultimate 3 is an alternative rock band from the United States. The band recently released the song Sorry from their album "Day In The Sun" in the United Kingdom.
View all posts by The Ultimate 3 →
The Ultimate 3 Video Release “I’m Sorry”
Thanks To Our Fans!