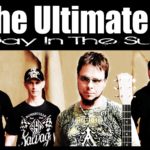 Acoustic guitar-based rock music often gets mislabeled by the MTV generation as “unplugged.”  The Ultimate 3’s “Day in the Sun” album refutes that tired notion with a collection of amped up songs showcasing the power well-rounded musicians can produce with acoustic guitars.

Based in Michigan, The Ultimate 3 is actually comprised of four members — Doug Kuiper on lead vocals and acoustic guitar; Mike Boeve on lead guitar; Mike Steffes on bass; and Dave VerMerris on drums. Everyone sings backup vocals.  The Ultimate 3 create warm, lush musical landscapes — punctuated by Kuiper’s distinct and often snarling vocals — that stand out in today’s cookie-cutter music scene.  “Day in the Sun” is replete with catchy hooks, meaty riffs and luxurious melodies.

Album highlights include:
This is not your father’s campfire sing-along acoustic guitar set.

The Ultimate 3 is an alternative rock band from the United States. The band recently released the song Sorry from their album "Day In The Sun" in the United Kingdom.
View all posts by The Ultimate 3 →
The Ultimate 3 – 2017 UK Tour
TU3 Signs with Tabitha Music in the UK!